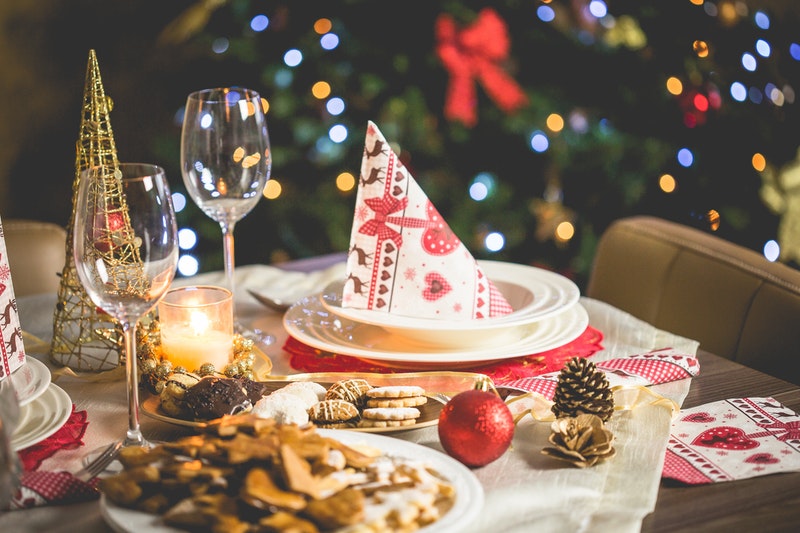 It goes without saying that Christmas dominates the winter months. And while it might make sense in Western countries that are predominantly Christian, one of the best things to have been on the rise over the past couple of years has been a thorough appreciation of diversity and inclusion. The wonderful thing about countries like the UK is that its inhabitants come from a huge variety of countries and cultures, so step aside Mariah – all we want for Christmas this year is to give the floor to some other winter celebrations.

Whether you’re lucky enough to have friends from different backgrounds or would like to raise awareness and celebrate other traditions and points of view, nothing brings people together like food. So this year, why not host a festive dinner that celebrates other cultures through their signature holiday foods.

First, let’s review the calendar and see what faiths celebrate which holidays and when. We’re all familiar with Christianity’s December 24th and 25th as Christmas Eve and Christmas Day, although Orthodox Christmas is celebrated on January 7th. Judaism’s Hanukkah was celebrated from November 28th to December 6th. Buddhist Bodhi Day is December 8th. The Pagan celebration of Winter Solstice, or Yule, falls on December 21st. Slight outliers as the dates are a little further afield, but since this is a celebration of different cultures and beliefs – the more the merrier. So why not include the Hindu holiday of Diwali, from November 4th and the upcoming Chinese New Year that will fall on February 1st. In just a few short months, we’ve covered special holidays from 6 very different faiths and cultures that so often go unnoticed.

Let’s explore what makes these holidays special, what is their meaning and what yummy traditional food can be added to the table, in their honour.

Celebrated over five days in the Kartik month, per the Hindu Lunar calendar, Diwali is the festival of lights. It commemorates the myth of the return of Lord Rama, his wife Sita and brother Lakshmana from 14 years in exile, having defeated King Ravana. The people of Ayodhya celebrated their return by lighting lamps, diyas and candles. So the festival celebrates the triumph of light over darkness, good over evil. This holiday is observed by Hindus, Jains, Sikhs and Newar Buddhists. Diwali also brings with it the Lakshmi puja – people pray to the Goddess Lakshmi to bless their home with wealth and prosperity.

In terms of food, samosas are an absolute must. It’s really up to you what to use as filling, but it can be vegetables, meats or lentils. Aloo Gobi is a great traditional comfort food and easy to make for sharing. It’s literally a dish of potato and cauliflower, so can be enjoyed by vegans as well. For desert, satisfy everyone’s sweet tooth with some amazing Gulab Jamun – deep-fried balls made of khoya and ghee, dropped into hot sugar syrup. Delicious, but not for the faint of heart – literally!

Another festival of lights, but this time of the Jewish faith, celebrated over 8 days, beginning on the 25th of Kislev on the Hebrew calendar. Hanukkah means ‘dedication’ and this holiday commemorates the rededication of the Second Temple, following the Macabeean rebellion against the Greek-Syrian rule in Jerusalem. The miracle, as described in the Talmud text, was that, upon the rebuilding of the Temple, there was only enough oil to keep the menorah light for one day – but the light burned for 8 whole days. Hence, Hanukkah is observed for 8 days, with a new candle being lit on a menorah each night, going from right to left.

Matzo ball soup would be the ultimate comfort food for a fancy feast, but soup is a little hard to serve at a buffet. Why not go for some of the other traditional favourite dishes, such as brisket and the braided challah bread. A slightly cheekier addition to the menu would be to make Sapphire Martinis, or another concoction featuring blue curaçao, to highlight the traditional Hanukkah colour scheme of blue, white and silver.

Definitely a lesser-known holiday, Bodhi day (meaning enlightenment in Sanskrit and Pali) is a much more subdued affair than the other holidays on this list. This day honours Buddha’s vow to sit under the bodhi tree until he achieved spiritual enlightenment. Buddhists prefer a calmer celebration, spending the day reflecting on the Noble Eightfold Path and peaceful meditation. Sometimes, home decorations may feature a buddha statue or small bodhi tree decorated with lights.

The signature food of Bodhi day is the traditional dish of milk and rice. A simple dish (which also makes it very vegan friendly), it is important because that is the first meal the buddha ate after achieving enlightenment. The Buddhist way of life is one renouncing material pleasures, so it’s not a day for extravagant feasts, but you can elaborate on this dish with some fresh fruit and enjoy simple heart-shaped cookies, to symbolise the leaves of the Fig tree.

The wonderful thing about the winter solstice is that it’s not subject to different calendars and happens at the same time for everyone, everywhere on Earth. This is literally when the North Pole is further away from the Sun, so on the longest night of the year, you definitely want to do a bit of celebrating, since from this point on – the days get longer and we slowly trickle towards summer. Of course, the Southern Hemisphere experiences the exact opposite – their longest day and shortest night, which gives a lovely duality to this holiday.

There are no particular traditional dishes for this day, as it is celebrated in different ways by different cultures. Pagans and Druids celebrate the first sunrise after the longest night in a festive gathering. In Iran, Yalda is observed, where eating fruits like watermelon and pomegranate is meant to bring good luck. Of course, the Feast of Juul (or Yule) centred around the burning of the Yule log. We recommend going with the Roman approach and the seven day festival of Saturnalia. This festival is all about freedom of indulgence for everyone – the true embodiment of eat, drink and be merry, so maybe a fun cornucopia of fruit, nuts, spiced cakes and plenty of wine!

Christmas was derived from the Pagan winter solstice celebrations, but it began to be celebrated on 25th December in 336 under the rule of Constantine, who was the first Christian Roman Emperor and made Christianity the main religion of the empire. Today Christianity has so many branches that Christ’s Mass is celebrated in different ways and different days, depending on which calendar you follow (Julian or Gregorian).

Traditional Christmas dishes likely need no introduction, but since the aim of a multicultural feast is to go for a buffet type setting, it’s probably best to steer away from making a massive turkey as the centrepiece. Such a feast is also a great opportunity to borrow from the Orthodox traditions and serve some traditional Russian dishes, such as Olivje salad, pirozhki, dumplings and of course, a shot of vodka!

Rounding off our menu with perhaps the most vibrant celebration on this list, Chinese New Year is a feast for all the senses. Chinese New Year follows the ancient Chinese lunar calendar and has been celebrated for thousands of years. No doubt you are familiar with the 12 animals of the zodiac: Rat, Ox, Tiger, Rabbit, Dragon, Snake, Horse, Goat, Monkey, Rooster, Dog, and Pig. Each new year heralds the arrival of a new animal, but also one of the 5 key elements: wood, fire, earth, metal and water. The elements also repeat cyclically and the combinations of different elements with different animals have not only specific significance, but specific meaning on each individual zodiac sign as well. February 2022 sees the arrival of the year of the Water Tiger, so check out what it might bring for you!

Even the celebratory food is steeped in superstition. All the foods eaten for Chinese New Year are thought to be lucky in various ways: spring rolls and dumplings for wealth, noodles for longevity and sweet rice balls for family togetherness.

Just as it’s important to respect all different faiths and religions, it’s equally important to respect those of no faith. Religion is not only spiritual and traditional but also a very deep, personal choice and those who do not align with any belief system should still be acknowledged, especially during the holidays. Whatever customs come with these and many other religions, the overall spirit of these festivals is kindness, coming together and looking to the future with hope, so get a few pizzas and ice cream for the agnostic and atheist guests at your feast and everyone raise a toast to family, friendship, food and fun. And probably some antacids as well…

December 8, 2021 By Lucy
0
Gluten-Free Lemon Pancake Bites How to spend a weekend in Dubai 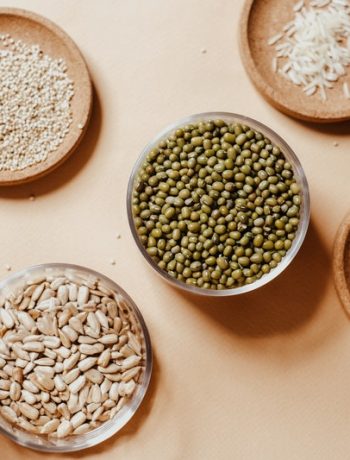 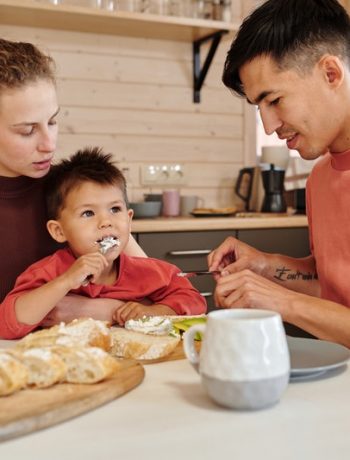 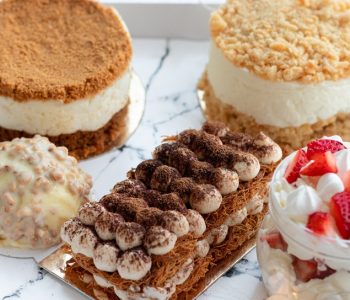 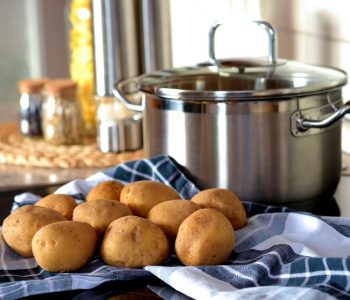 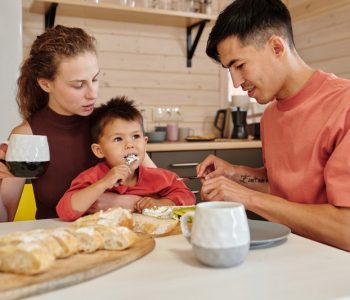 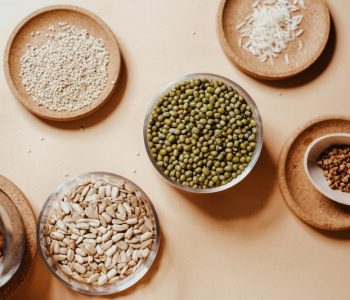 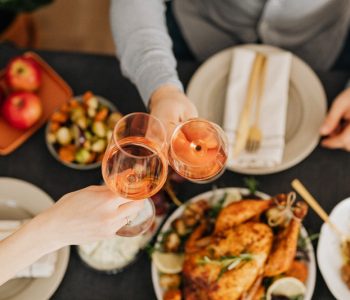 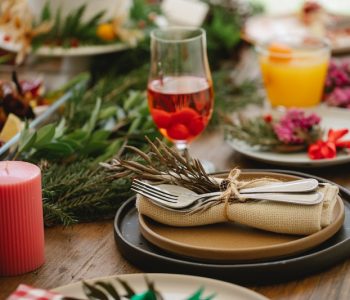 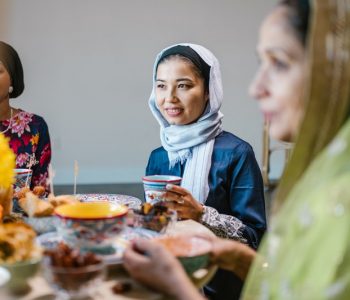